In 2021 WSI published an article telling the story of North Atlantic Seafood Forum and their commitment in reaching the goal of 40% female speakers in their events by 2025. In the same article, several major seafood conferences and events in 2018/2019 were analyzed from the point of view of female representation, and it was found that on average only 19% of speakers were women. What is the situation 2 years later? Has it evolved? Let’s dive in!

A slight improvement, yet far from parity

The main goal of this analysis and of “counting” women speakers in conferences and events is to provide a broad overview of the general situation and it does not want to be exhaustive or final, because the selected conferences are just a minority compared to the totality of events happening in the seafood industry globally.

However, it is important to give an idea of the current trends and of (if any) improvements towards more gender balanced conferences. What has been found in this year’s counting is already an improvement from the analysis of 2018/2019. On average, 31,6% of speakers were women, which can be seen already as an improvement from 19% in 2018/2019. The highest representation of women speakers was found in the conference Icefish Connect 2022, with 48,3%, which is not surprising as we know Iceland has been a key-player for gender equality in general, while the lowest percentage was found in the 17th Infofish World Tuna Trade Conference and Exhibition 2022, with only 15,8% of women speakers.

Despite improvements in the representation of women in seafood conferences and events, the sector is still far from reaching a gender equitable situation. In fact, as shown in our analysis all events are still below the 50% threshold that would mean having achieved the perfect gender balance of speakers. 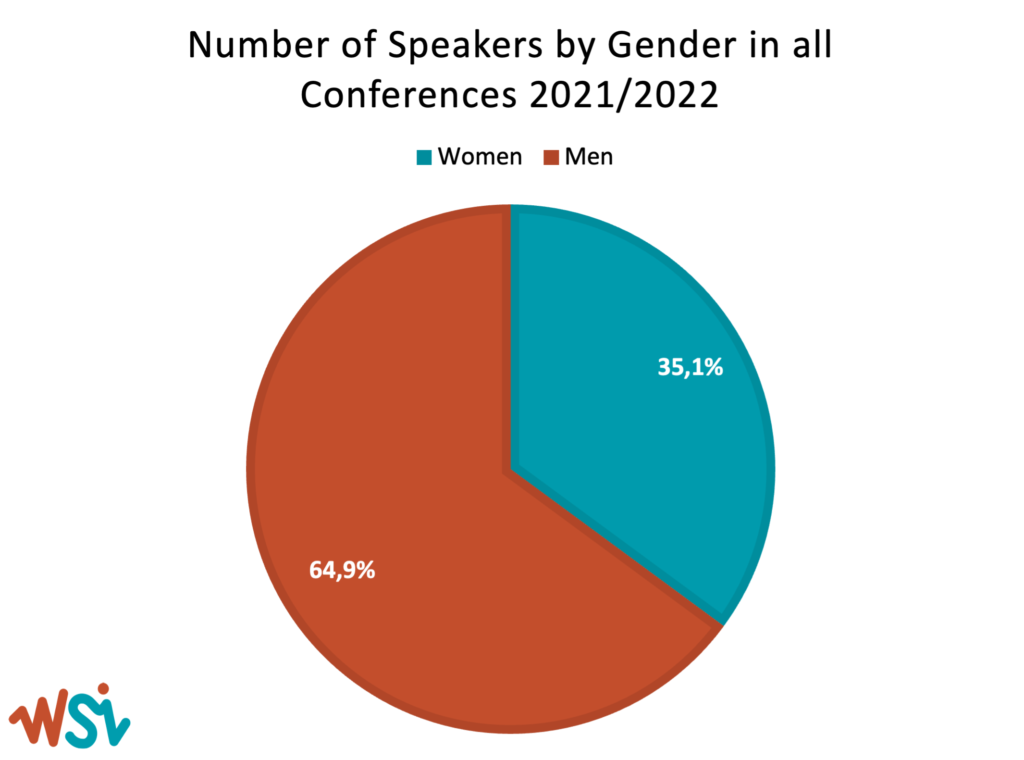 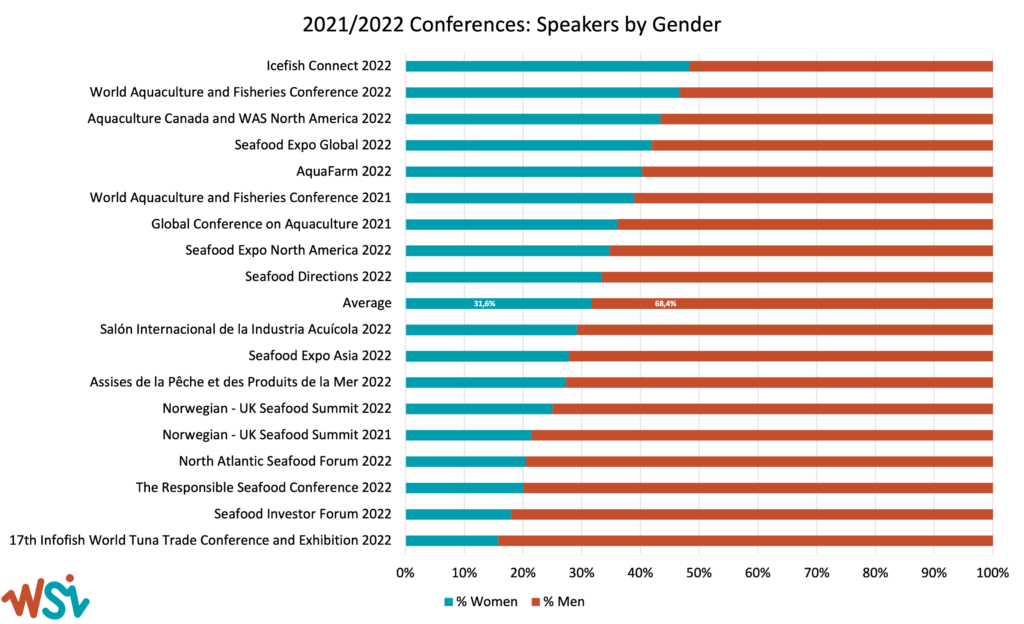 Role models are essential, why is that?

Representation of women in public space seems obvious for any feminist organization or activist. Girls and women need to know they are listened to equally as men because their thoughts and ideas are as good. We know for a fact that representation of women in outlets and public speeches, political sphere or audiovisual media is largely unequal. Unfortunately, the seafood industry does not escape that revolting reality.

Gender balance in seafood conferences and events is still a myth and most of the times not even closely reached. However, aiming and reaching this gender parity means giving voices to diverse groups and hence to different points of view, which in turns can inspire people who can see themselves represented and can aim for similar roles.

Often, a stereotype that persists is that there are no women experts in fisheries or aquaculture who could speak in seafood events and conferences about technical topics. Maybe the organizers did not search for them? This historical misconception is of course originated from sexist conscious or more often than not unconscious and socially-culturally constructed persistent biases. Women are considered less skilled and not valued as important public speakers or figures of authority. Maybe they were never given the chance? Maybe they were taught by patriarchy to be less self-confident therefore they do not dare to speak up?

Let’s give women the mic!

It is time to break these prejudices and fight clichés by starting to hear women and minorities experience and stories in all possible fora. This change in perspective might offer the industry new glasses which can only bring richness in creativity and problem-solving. WSI calls for all organizers of conferences to take into account this fundamental aspect and to act accordingly as to guarantee the representation of all groups and in particular of women. Reaching a gender balance among speakers means also enriching the contents of these events and provide as many different perspectives as possible.

WSI decided to renew its original analysis done in 2018/2019 on the presence of women in seafood conferences and events for 2021/2022. The conferences included in this new analysis are not necessarily the same of the previous study. This is due to the fact that some of them did not happen in the new biennium 2021/2022 or because the agenda of the conference with the names and data of the speakers was no longer available online (for example for the French Assises de la Pêche et des Produits de la Mer 2021 or the Norwegian North Atlantic Seafood Forum 2021). The analysis was based on the counting by sex of panelists and speakers for the conferences selected. The information was retrieved from the websites of the conferences where the agendas with the names of the speakers for the whole event were published. In some cases, it was impossible to determine the sex of the speaker, thus the percentages did not consider them (for example for WAS 2022, for 21 people it was not possible to determine the gender and, in this case, the total number of speakers was computed considering only female and male panelists, and hence the final percentage does not take into account those other 21 people). In other conferences, if the same panelist was featured more than once, it was counted just once for the purpose of the final counting and percentage.

This study has been produced by Maria Grazia Cantarella, WSI Consultant, and conducted, completed and reviewed by Camille Cherques, WSI Director.