Seafood supply companies underperform significantly when it comes to policy and actions in favour to gender equality, compared to public facing companies in retail, food service and hospitality.

In late 2020, the WSI organisation undertook a benchmarking study among 53 large-scale seafood stakeholders and measured the intensity of their gender focus policy and actions. The investigation clearly shows far better performance by consumer facing companies than their suppliers along the value chain.

According to the WSI experts, “It is clear from the analysis that gender equality has reached the consciousness of retailers and wholesalers, large scale aquaculture feed producers and global hospitality players who performed well across all the parameters measured. Seafood companies, on the other hand, had consistently lower scores, and clearly much work needs to be done, to ensure that the importance of gender inclusion and equality is understood.”

The study looked at how the seafood industry addresses gender equality and sought to identify best practices on gender equality performance, reporting and communication. The information was gathered from publicly available information on company websites between June and October 2020 and based on current reporting frameworks such as those used by the Dow Jones Sustainability Indexes, the Asian Seafood Improvement Collaborative, GRI Standards, the Sustainability Accounting Standards Board, and SDG 5, the Sustainable Development Goal on Gender Equality.

The reach of the study was broad in terms of both supply chain sector and geography, and covered companies in 19 countries, from Australia to the USA, many of whom operate worldwide. The performance of 53 companies was analysed, including 36 major seafood producers and processors, 10 retail and wholesale chains, 4 aquaculture feed companies and 3 large food service companies. 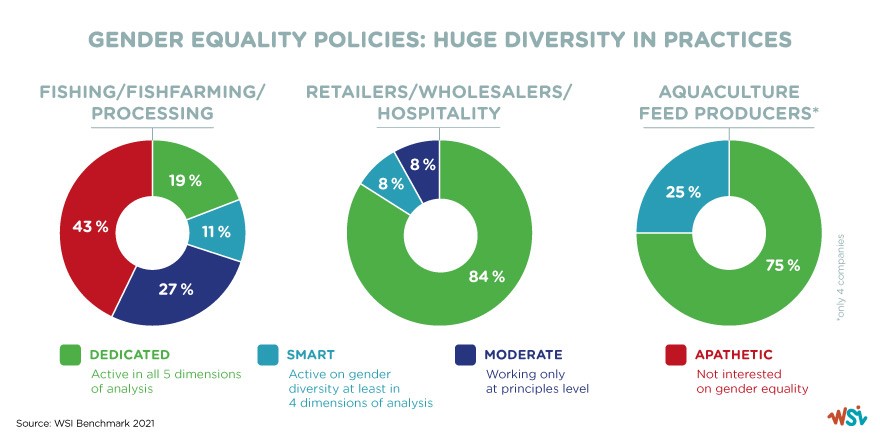 “Key Findings reinforced the need for the seafood industry to improve management practices globally. Almost half (43%) of the seafood companies list no gender content on their websites or in company reports, indicating strongly that they do nothing in the field. Of the other half, they somehow communicate about gender equality, but less than one-third (30%) take real action. Feminism washing where there is a gap between the discourse and the reality is on its way.”

On the positive side, 100% of the retailers and wholesalers, aquaculture feed producers and hospitality/ food service companies analysed are going beyond their policies and codes of conduct, to implement meaningful action measures to bring gender parity into the workplace.

Other findings of interest include the discovery that gender equality is not front and centre in companies’ reporting structures, but is mainly disclosed under sustainability, as seen from a social perspective. In addition, very few seafood companies are making SDG 5 a priority.

In the retail category, Walmart, Sainsbury’s and Metro came in first, second and third place respectively, in terms of the number of gender related activities reported, and Sodexo and Compass took the top two slots amongst food service companies.

Some consumers’ facing companies start requesting efforts in this field from their suppliers, in the form of new gender equality commitments specified in their suppliers code of conducts (Walmart, Kroger, Metro Group, etc.)

“By sharing our research findings, we hope to provide a wake-up call for the global seafood industry, and to act as both a catalyst and an accelerator for change, to ensure that the importance of gender equality in society and in the workplace is acknowledged and celebrated.”

A further aim is to identify potential partnerships with NGOs focussed on the equality and empowerment of women in the industry.

“The results of this study rings a bell with the sustainability debate 20 years ago. At that time sustainability of marine resource was seriously taken into account by consumers’ facing companies including the retailers and hospitality companies and negligibly by producers. We are confident that industry stakeholders will wake up as well on gender issues as they did for environmental ones. Consumers and even more so employees’ confidence is at stake.”

The full analysis, which provides a detailed breakdown of the benchmarking study results, is available from WSI.