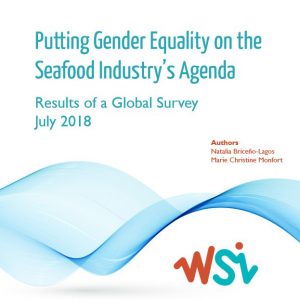 The International Association for Women in the Seafood Industry (WSI) shares the preliminary results of a global survey carried out in late 2017 on the perception that seafood professionals, both men and women, have regarding the situation of women in the seafood industry. The time has come to engage everyone, regardless of gender, to fight the battles associated with acute challenges such as environmental sustainability and resource management (including IUU), and climate change.

The International Association for Women in the Seafood Industry (WSI) shares the preliminary results of a global survey carried out in late 2017 on the perception that seafood professionals, both men and women, have regarding the situation of women in the seafood industry. The time has come to engage everyone, regardless of gender, to fight the battles associated with acute challenges such as environmental sustainability and resource management (including IUU), and climate change. Introduction The International Association for Women in the Seafood Industry (WSI) was set up to raise awareness of women’s contributions to the industry, to highlight the disparity in status between men and women, and to help the industry work out constructive solutions. The Association has conducted studies on a global scale, presenting the findings through various means, such as this article, in order to gather support for concrete action to address the imbalances.

The seafood industry is commonly described as being maledominated, with, in the background, the subliminal figure of the tough fisherman facing the rough seas. Aside from the myth, the reality is different. If we consider the whole industry along the entire value chain, including workers on shore, the global disaggregated figures confirm that nearly 50% of all workers are women. More specifically, women represent 85% of all workers in the processing industry and 70% in aquaculture; but they are absent from the decision making processes. No more than 10% of the directors are female and they have limited access to negotiation rooms and remain invisible to decision and policy makers. Men and women occupy distinct roles all along the seafood value chain, and regardless of the level of development in all countries, female workers are consistently over-represented in low-skilled, lowpaid, low-valued positions and remain mostly absent at the higher end of the value chain. The distribution of power and profit between the two sexes is blatantly uneven.

These observations were the basis for a WSI global survey carried in 2017, the particulars of which are outlined in the following pages.

‘Gender on the agenda’ survey findings

In order to better grasp what the industry participants perceived about the situation of men and women in the industry, WSI initiated a global survey “Gender on the Agenda in the seafood industry” and collected the response of 695 seafood professionals, of whom 71% were women and 29% men from the five continents. The WSI staff analysed the substantial information and here are some of the most significant results.

Is the seafood industry equally attractive and fair to both sexes?

Analysis of these answers by sex reveals a notable difference of perception between men and women. A majority of women (61%) consider that the industry is not equally attractive and fair to women, compared to 44% of men. Conversely a majority of men (48%) consider this industry equally fair to both sexes, compared to 34% of women. Clearly, men and women do not share the same perception.

When we explore the situation by sector (except for NGOs) negative responses which say the industry is not equitable nor equally fair to women outnumber the positive ones, with a noteworthy difference of 10 points between fishing (not equitable for 64%) and aquaculture (not equitable for 55%). Gender is a complex concept which describes the social allocation of different roles, rights and responsibilities to males and females; this is not just about women but about the gender organisation of an industry, a company, and a society. In our questionnaire, we made the assumption that everyone had the same understanding of this issue. People were asked if gender issues were ‘talked about’ one way or another within their companies, and what was it that sparked debate. We realise that ‘talked about’ can be comprehended in an array of situations from informal discussions among colleagues to formal written HR policy.

Why gender issues are not talked about in your company, by sex

Answers by sex once again show different responses. Over half of the women surveyed considered that the issue is not talked about because it is not recognised as a problem. Only a third of their male counterparts gave the same response; i.e. for 55% of the male respondents, there is no gender inequality. Only 34% of women agree. As sociologist Mickael Kimmer wrote in a fairly recent article in the UK Guardian: “Men can’t see what the issue is: privilege is invisible to those who have it”.

What are the gender issues talked about in your company?

Clearly here, men and women have different viewpoints. For 71% of men, the lack of women applicants is perceived as one of the main issues that prompt discussions. For women (49%) the issue most often cited is that they face unequal opportunities.

For 33% of all women, workplace gender-based discrimination is an important issue that feeds the debate, but only 8% of men perceived it as a subject to discuss.

We then asked what the barriers to gender equality are. Respondents were offered a list of possible factors to choose from and were also free to give their own views. It is worth noting that responses to this issue were identical, whether the respondents were male or female.

Many of the comments indicate one prevailing explanation: that the industry is not friendly towards women with family responsibilities. Working conditions do not facilitate a balance between work and family life; and for many women in countries throughout the world, pregnancy and motherhood implies having to quit work.

Lack of incentives and encouragement at the school level was another key barrier, with women and men being channelled into different training programmes and professions. Here are a few examples: in 2012, of the 180 students enrolled in the Icelandic School of Marine Engineering, there were only eight women at the start, and another five studying at the highest level. In Tasmania, the gender discrepancy in training is similarly very high: out of the 6 431 students registered to undertake a training course in seafood, only 6% were women, a much higher difference than in the overall gender representation in the Tasmanian seafood industry.

Interestingly enough, male respondents consider that “male leaders don’t pay attention to this issue”, which acts as a plausible barrier to women. This may be interpreted by the reverse: if male leaders did pay attention, problems could be solved.

Equality will not happen by accident

Gender equality will not happen by accident, it will be the outcome of an intentional HR and management policy with dedicated and measurable objectives. To the question “what do people believe to be the most positive initiatives to boost equality at work”, three responses were in the lead. We see that in most regions (except for Oceania, probably because of the small sample of answers from this part of the world), initiatives which assist in the work-life balance were cited as being the most important in helping to fight inequality in the seafood industry.

The second most cited impactful initiative was the implementation of gender-awareness programmes. Throughout the survey, professionals blamed an unconscious bias which hinders equality, i.e. unfair differences in the treatment of men or women based on their sex. One of the female respondents to the questionnaire, an African woman working in aquaculture shared her thoughts: “Do not judge women as being delicate females. Give anyone a fair chance, no matter their gender. Males and females can work equally as hard in any environment”.

The third most cited initiative was to develop a pro-active gender-sensitive hiring policy. As a man from Scandinavia said: “Encourage women to apply during hiring processes.” An Asian woman involved in aquaculture recommended: “Balance the hiring part”; and a woman from Europe shared what was being implemented in her company: “Initiative for gender parity at all levels with targets set for 2020.”

Gender equality in the seafood industry: the path forward

There are many reasons for the seafood industry to embrace gender equality: it is pertinent from a philosophical point of view (equality between the sexes); a social standpoint (the role of individuals of both sexes in the company and the community); and last but not least, from an economic perspective (bottom-line performance, valueadded creation, distribution of responsibilities and profit).

One of the findings of the survey is that men and women do not share the same viewpoints regarding gender equality in the seafood industry, which is reminiscent of the environmental debates two decades ago when fishermen and environmentalists did not share the same positions. It may take about the same amount of time for both parties in this newer debate on gender to more or less agree on the questions and solutions.

Another conclusion of the survey is that men should be engaged in discussions on gender equality. As stated in the Platform for Action adopted at the Fourth World Congress on Women held in Beijing in 1995: “The advancement of women and the achievement of equality between women and men are a matter of human rights and a condition for social justice and should not be seen in isolation as a women’s issue.” In other words, women talking to women about women will not reach the expected transformation.

In the seafood industry, several attempts to call attention to this issue – despite the interesting discussions – have been limited in their impact. As one woman working in the seafood services industry reported: “We have a women-network, and issues are talked about; we also have a committee discussing this issue. The problem is that men are not involved in the conversation and that the core underlying issues are not solved/ dealt with”. Men should be engaged in the discussion and that will only happen if they understand that they have nothing to lose in working on gender equality. The question now is, how can we bring men into the discussion?

When we talk about this subject to male executives, we note a clear difference in their reaction according to their personal situation: if they have close female relatives in the industry such as daughters, they are more likely to be open to the discussion. But the subject needs to be brought out of the personal sphere. If we target private businesses, should we talk about the bottom line of their business? From an economic point of view it has been proven countless times that the higher the gender mix in a business, the better the financial results for individual companies. We should ask ourselves why most seafood companies still disregard these potential benefits despite the evidence. What other force would override a desire to maximise profits and returns for shareholders?

The seafood industry is facing several acute challenges: environmental sustainability, climate change, and food security. These crucial issues receive intense attention from global institutions, NGOs and industry stakeholders; and if not tackled, they will impact upon the future of the global seafood industry and every man and woman who works in it. One common feature of these major concerns is that women are systematically overlooked. Thanks to the work of institutions such as WorldFish and the FAO, and nonseafood organisations such as Catalyst, we can surmise that taking into account the gender dimension of the industry, which means recognising the full potential of women, is key in reaching the industry’s goals.

One can expect the discussion on gender equality in our industry to continue for some time yet. For all those who wish to resume this conversation, WSI invites you to join the 7th Gender in Aquaculture and Fisheries conference that will take place in Bangkok at the Asian Institute of Technology from 18-21 October 2018. GAF7 will explore the horizons for gender equality and inclusiveness in aquaculture and fisheries. It welcomes participants from all countries.