Many of us attended many events and conferences in real life before the pandemic, or webinars and online seminars in the previous year. Many of us experienced fairs, workshops, booth exhibitions, and faced panels of speakers on the topics we are interested in or related to our careers. However, did it happen for you too to think at some point during the round table: “Where are the women in this panel?” or “Why is there only one or two women, and most panellists are men?”

Balanced representation should be a reflex

If you have, it means you already apply a gender lens in your daily life. It is not even a truly reflective thought but more an intuitive reflex. In the case you never thought that, you will for sure now. The same thing happened when you started seeing plastic waste all over streets and beaches, or single-use plastics in shops that could be eliminated. Before that, your life was simpler, but poorer. Now, you have gained complexity but enriched your views of the world we live in.

For us, counting women on panels is not a fun game or a side activity. It is not even a competition. It is about having role models on the stage that are confident enough to speak out and share their voices, their stories, their perspectives, which will necessarily be different from the usual ones we have been hearing for centuries. It is time to break the vicious circle of invisibility: women must be heard.

Counting is not about mathematics – we were told women are not good in maths anyway – counting is about balanced representation. If half of society is composed of women, and more relevant half of seafood workers, they should be fairly represented. 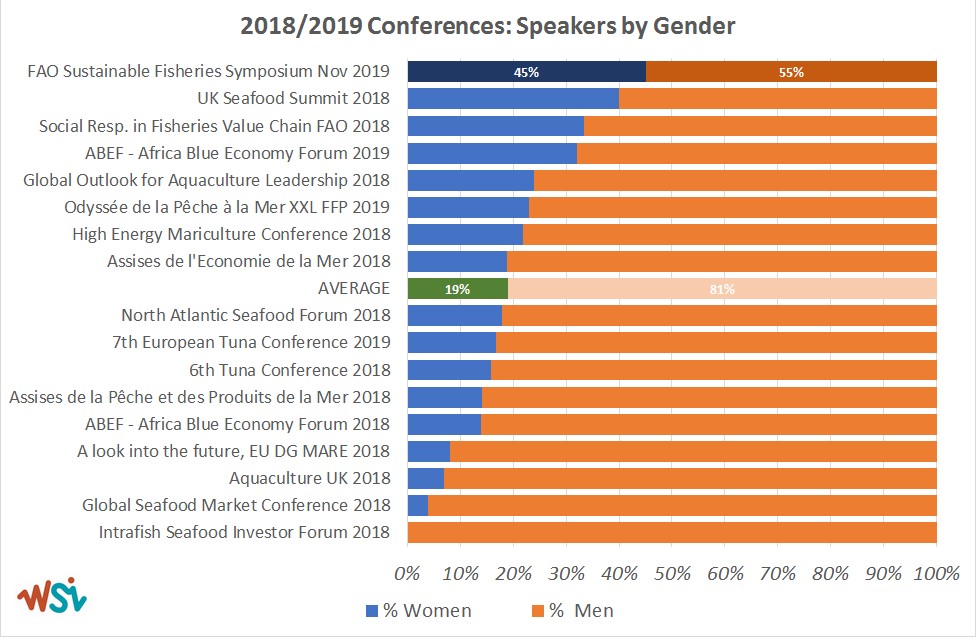 Breaking the glass ceiling and the prejudices walls

If they are not, it may lead to the construction of stereotypes such as “if they are not here, it is because they don’t want to” or “they don’t have the skills or interesting and right ideas” or even “their place is at home taking care of the kids and the house, not in the discussion about our future”. The result is a cycle of exclusion where women are considered less competent and legitimate. Indeed, if women are not valued as speakers, they will not be invited to media interviews as the “experts”, to other forums or invited to do business with companies which feel confident about them if they were celebrated by their peers.

The absence of women as top speakers may be the result of unconscious bias rather than intention. However, it is time for organizers of seafood events to be intentional and more creative.

A long road of improvements for the North Atlantic Seafood Forum

In 2012, the North Atlantic Seafood Forum, the largest seafood professionals’ event in the world, had only 6% of women as speakers in their debates. The number was so low it triggered an article in Seafood Source which highlighted that “of the 64 speaking slots, only four were allotted to women.” Attendees, both men and women, were truly chocked by the situation, which was highlighted by our Executive Director, Marie-Christine Monfort, who spread out the word during a session.

Six years later, the number grew to 21%, already a great improvement we can recognize. Today at NASF 2021, 25% of speakers are women. No one can ever say again women speakers do not exist and are hard to find or women cannot be spokespersons. Of course, they can, if they are not prejudiced against based on their gender or made invisible and quiet. If you have struggle finding women who can talk about fish or shellfish, we can help. The organizers have taken steps thanks to WSI lobby and advice throughout the years to ensure equal representation.

What is even more historic is how NASF truly sets a great example for other large seafood events around the globe. In June 2021, WSI co-organized with them a 2-hours session about “Women in Seafood: Gender equality, bridging the gap” with companies presenting the benefits of gender equality policies and the solutions they implemented, to inspire other businesses to follow. The cherry on the cake is the Memorandum of Understanding that NASF signed with WSI, incorporating a goal of 40% of female speakers by 2025. NASF also committed to include Sustainable Development Goal n°5 on Gender Equality into their sustainability workshops. We will support NASF to reach their realistic and ethic ambition in coherence with SDG5.

WSI is really proud to be part of global efforts towards improved representation and visibility of women in the seafood industry and to witness true social change. Let’s hope others join them, and us!